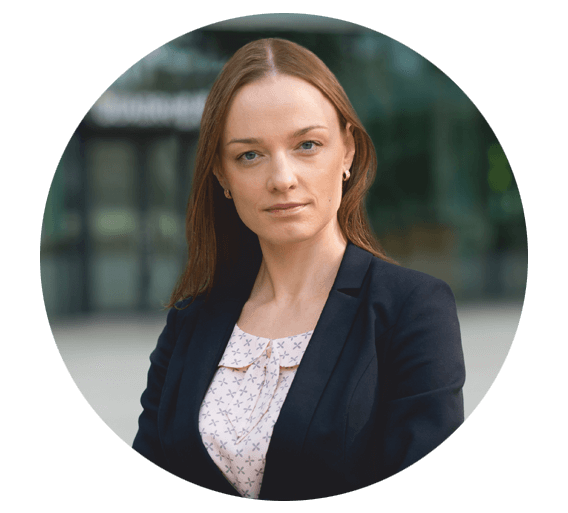 I am Aurelija Maumevičė – a lawyer, a mediator, the board president of the association “Integrated Mediation in Lithuania“.

I have been providing legal services since 2009. Since the year 2014 I am a full member of the Lithuanian Bar Association and since then I have been working as a fully qualified lawyer.

In my legal practice I always try to help clients to settle the disputes in a peaceful manner, preferably before filing the case to the court as legal processes are mostly long-term, they are costly, emotionally difficult and time consuming.

If, however, there is no possibility to settle a peaceful agreement or it is non-perspective as a lawyer I help to defend my client‘s violated rights in court which, it must be acknowledged, sometimes is the only effective means to protect person‘s legitimate expectations.

I believe in peaceful dispute resolution and I am willing to assist my clients to reach settlement in a peaceful manner, thus, since 2019 alongside my lawyer duties I have become a mediator – the third neutral party, included on the Republic of Lithuania List of the Mediators, helping to reach peaceful settlement between the parties.

In my legal and mediator practice I have been cooperating with lawyers from law firm Drakšas, Mekionis and Partners, lawyer – mediator Gitana Gudaitė, lawyers from Germany Indre Maria Lukas and Raimonda Kraemer, association “Integrated mediation in Lithuania”, etc.

I provide services to private and business clients in different areas of law.

I am most experienced in the areas of civil, administrative, labour and bankruptcy law, especially concerning the disputes between co-owners, as well as the areas of legal relationship of business, family, inheritance, contractual and non-contractual liability. I also deal with legal issues in the areas of property, construction, transport, bank and finances, insurance and medicine.

My legal services include:

Mediation is not the replacement of court or the continuation of court proceedings, as sometimes people tend to believe. It is alternative to judicial procedure when one or several mediators help the parties to solve the dispute in a peaceful manner. In case mediation fails, the parties can always forward their dispute to court and resolve it there.

When mediation is started, the limitation period of a claim is suspended, so one should not worry about missing the period of limitation due to mediation.

Thus, mediation may be held until the action is brought to court as well as after the dispute is being resolved in court.

Essential differences between mediation and court proceedings are:

In certain areas of legal relationship (e.g. family, business, co-owners, neighbours, and small claims) mediation is very acceptable as it focuses on maintaining the relationship between the parties and is fast and relatively cheap.

Still, it should be noted that mediation is possible only in those cases where peace agreements are not prohibited by the mandatory rules.

Mediation is held by voluntary approach of the parties – mediation is possible only when both parties agree to participate.

In fact, since January 1, 2020 Lithuania passed the institute of mandatory mediation, which projects that mandatory mediation shall be applicable in the cases of family disputes heard in court proceedings as it is provided in the Code of Civil Procedure of the Republic of Lithuania. This means that parties can resolve their dispute in court only after they have tried to do it during mediation.

In addition, if the judge (or chamber of judges) defines a major possibility for peaceful resolution of the dispute, it may be transferred to mandatory mediation.

Other important aspect that needs to be noted is the stamp-duty relief. The law provides that if the parties solve their dispute by the means of mediation before appealing to court, 75 percent of stamp-duty is paid but not less than 5 euros. The stamp-duty relief shall not be applied if it comes out that the party was not honest in applying for dispute resolution by means of mediation or used mediation dishonestly or applied during the mediation dishonestly.  The relief is also not applied in the case of mandatory mediation.

The settlement reached during the mediation can be submitted to court and can act as the final judgement of the court.

If you believe that mediation is a perfect means for dispute resolution in peaceful manner and are willing to resolve the dispute in a peaceful manner – I am ready to help. Contact me!